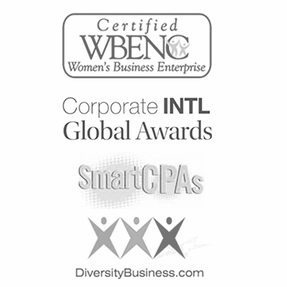 The team at Lagerquist Accounting & Advisory brings award-winning experience and proven capabilities to each client. Learn more about the firm’s recognition for excellence, as well as our key certifications:

Sylvia Lagerquist was recognized as a winner for the 2016 SmartCEO Centers of Influence awards, recognizing the leading accountants, attorneys and bankers in the Washington, D.C. region.

Sylvia Lagerquist, CPA was featured in the 9th edition of Profiles in Success, the guide to Washington DC regional business leaders, in 2014.

Lagerquist Accounting & Advisory was named the Corporate INTL Global Awards Winner for Full Service Accountancy Firm of the Year in Maryland in 2012.

Sylvia Lagerquist, CPA was featured on the cover of CPAConnections (Spring 2012 edition). CPAConnections is published by CPAConnect, a national association of CPA firms.

Lagerquist Accounting & Advisory was granted the WBENC Certificate by the Women’s Business Enterprise National Council in 2013.

Lagerquist Accounting & Advisory was granted Supplier Development and Diversity Division Certification as a business headquartered in Prince George’s County from 2013 through 2016.

We use cookies to ensure that we give you the best experience on our website. If you continue to use this site we will assume that you are happy with it.Ok